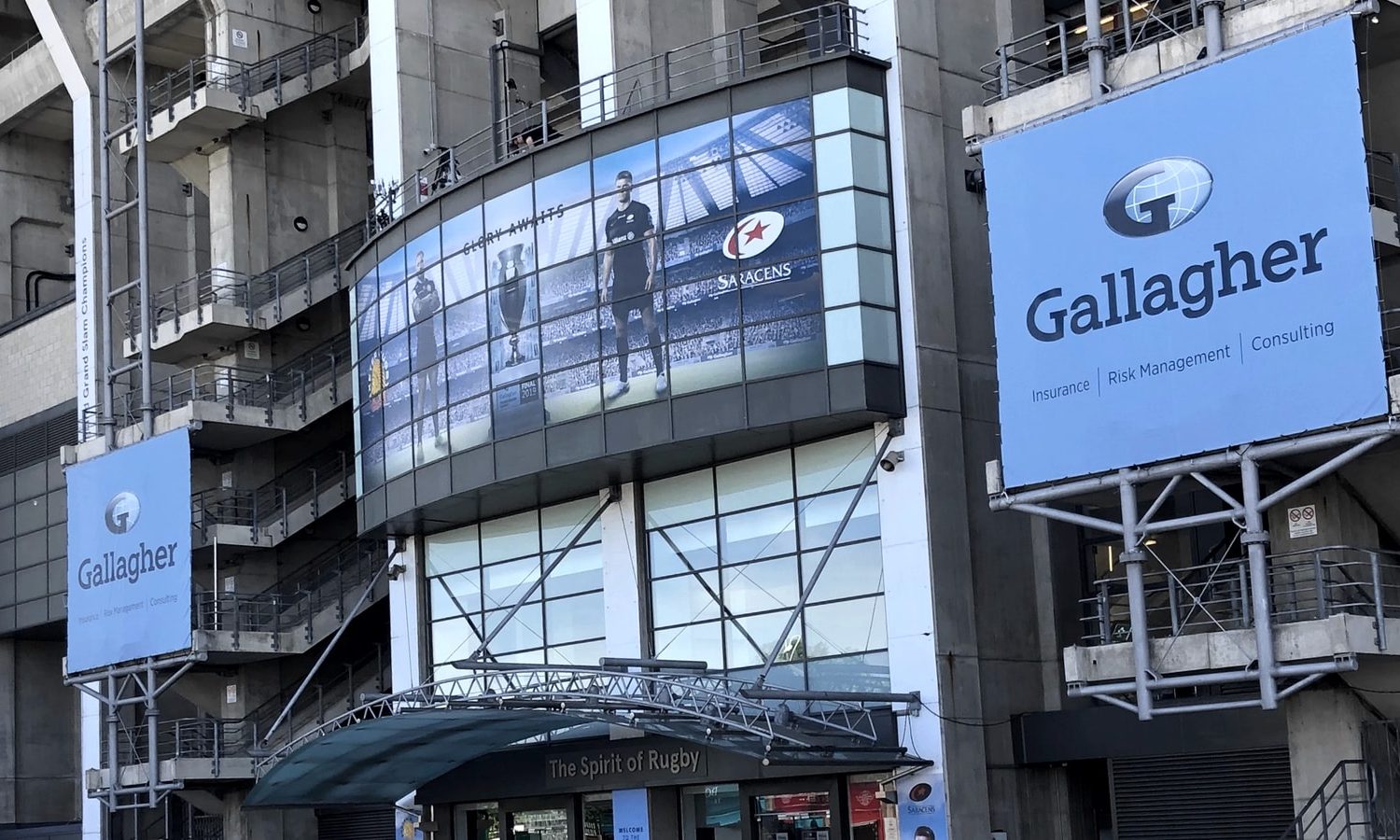 How the three title sponsors ensure they ‘own the moment’

For any title sponsor whether new or well-established, there is a need to convey the premium level of association that has been invested in with the rights holder, be that a club, league or tournament.

By its very nature there is only one title sponsor and so claiming that position is important to realise a return on the extra investment made for the top spot.

From the outset, it was clear that Gallagher’s activation focus would be on Community – internally for staff and externally within rugby clubs themselves.

The photo shoot from the season launch featured players from each club, as you’d expect. But also volunteers from each club too. It was a photo that showed Gallagher’s intentions from the start and still takes pride of place on their social media banners with the statement “Proud to partner with the clubs and communities of Premiership Rugby”.

We’re honoured to kick off the season by celebrating 24 community heroes and rugby ambassadors, who inspire their clubs and truly bring the game to life! Learn more about our #GallagherPrem #HeroesOfTheGame here: https://t.co/zlcwkXhlTz pic.twitter.com/SuTB0vhXcL

It’s a clever move from a previously little known organisation and to make a clear distinction from their predecessors, Aviva.

Speaking about the firm’s sponsorships, Chris Mead, Chief Marketing Officer said, “It’s not just about… rugby, but it’s also the commitment of both the clubs and Premiership Rugby to the community outside the sport itself. They are making it a better place to live and improving the community in the United Kingdom and wherever rugby is played.”

We know that they are looking for increased brand awareness and as we are at the end of the season, that measurement of impact will soon be taking place, but they will already have a feel for their reach into rugby communities and the effect on internal teams, particularly sales teams.

Cutting out the Competition

Talking of brand awareness, that is something that mega-sponsor Heineken, the world’s most international brewer, does not need.

They do however need to cut through the competition and the world’s biggest sporting events can become too cluttered. As we wrote in ‘There’s still space in Rugby for big logos’ Hans Erik Tuijt, Heineken’s Global Sponsorship Director said, “Football is totally overcrowded. If you take the FIFA World Cup, for example, there’s far too many brands associating themselves directly. It is difficult to cut through whereas you don’t have that as much with rugby”

So, as well as being a Rugby World Cup sponsor, Heineken has returned as the title sponsor of the EPCR Champions Cup. With rugby reaching new markets and the Final being held in non-traditional locations, this was a clear expansion move further penetrating markets with a positioning that gives the beer brand more standout than other events could.

It’s not all commercial though. Heineken is a long supporter of rugby charities and used its title sponsor position to be able to promote School of Hard Knocks charity and raise funds at the live events for the worthy cause.

We’re asking fans at the EPCR Heineken @ChampionsCup final to help us support getting people back to work. We’ve already helped 132 through our partnership with rugby charity, @SoHKCharity. Find out more: https://t.co/W2DJr8vRrH pic.twitter.com/5ulrhHuUx8

Guinness is Title Sponsor of the Pro14 and the Men’s and Women’s Six Nations Championships.

Few brands are more synonymous with rugby than Guinness, so why did it need to take the title sponsor position of the Pro14? Already an official supplier, the upgrade allows Guinness to ‘own’ the experience.

Guinness aims to be part of the story and their sponsorship activation focuses on story-telling, of real fans. Emotional stories that we can all appreciate, told through Guinness’ unique lens for good advertising.

Guinness branded Point of Sale kits, allow the fans in the pubs to feel some of the same spirit as those in the stadium, who are surrounded by on-pitch branding, fanzone activations, big screen videos, branded pint glasses, tickets and t-shirts.

Their goal is to ‘own the moment’. To be part of the experience.

So, what do they have in common?

All three of these sponsors have different approaches to their sponsorship activation. Gallagher’s community angle fits well with their corporate culture and aims to position them as part of that community rather than as a sponsor of it.

Heineken identified the Champions Cup as being a key way to stand out from the clutter of other events so that they can expand in these markets. And Guinness reinforce their historic association with rugby by telling the unique stories of the sport, by becoming an inextricable part of the experience and leveraging the emotions.

What do all three have in common? They use Amayse 3D Painted Logos to place their brand in the action, in live broadcasting, in highlights and, very often, smeared onto the players themselves.

Our stadium branding dresses venues for these major events. Making a moment to remember for the players and the fans. And making the spectacle even more attractive for TV cameras.

The Finals of these three competitions draw increased attention and for the biggest day, we make sure that stadiums and sponsors look their best.

Find out more about our stadium branding solutions

BACK TO NEWS & VIEWS

Any cookies that may not be particularly necessary for the website to function and is used specifically to collect user personal data via analytics, ads, other embedded contents are termed as non-necessary cookies. It is mandatory to procure user consent prior to running these cookies on your website.